But I swear to you I have not been lax in making things. I guess I should tell you about them.

In May I made a top from the Washi pattern, with the Eucalyptus print from Anna Maria Horner’s Pretty Potent line. It’s the quilting cotton rather than voile so it’s a little heavy. But that’s OK. 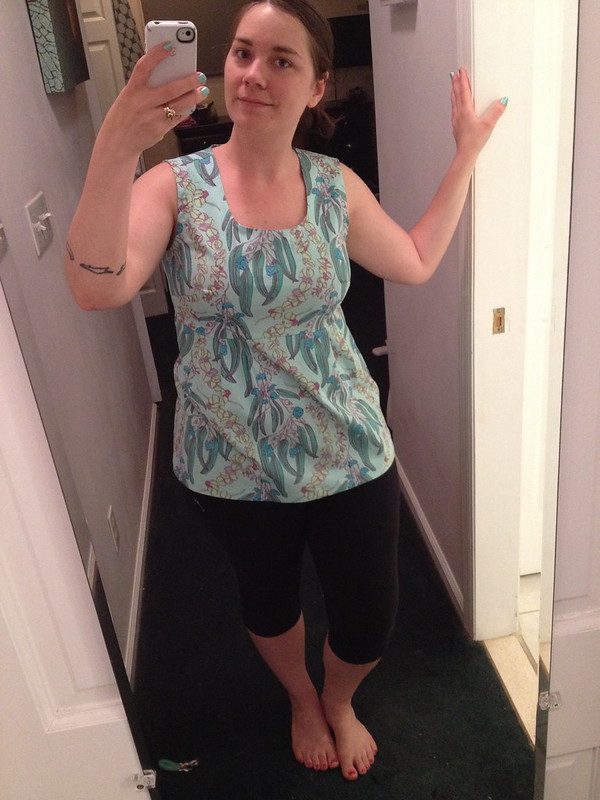 Soooo yes I did the Trenton Punk Rock Flea Market on March 29th (it went very well, thank you, I sold many of my embroideries!), and then I decided to take the next week off from doing anything, since I have no more shows any time soon. Then the next week I got sick and spent several days in bed feeling terrible, not doing anything. By Friday April 10th I felt better enough to come up to my sewing room. That’s when I discovered poor Alfie, my elderly ferret, had totally shredded her sleep sack. So I threw together a new one. 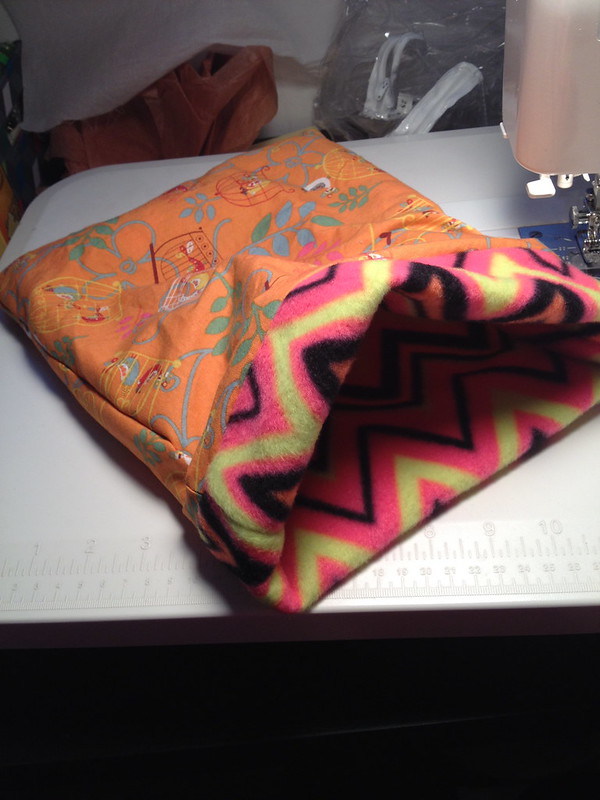 At nearly 8 years old, Alfie has lost her vision, so she relies even more heavily on smell to find her way. She didn’t really acknowledge the existence of the new sleep sack for about five days but she’s sleeping in it now. Yay.

On Saturday the 11th, I got the new Alabama Chanin book in the mail – Alabama Studio Sewing Patterns. Cool. I was feeling pretty itchy since I didn’t make anything for two weeks, BUUUUT the book came with a CD full of PDFs rather than paper patterns in the back. So I couldn’t make anything from that right away; I had to wait until I could get the patterns printed. But I did have the Washi Dress in the back of my mind – I bought fabric for it a year ago and bought the pattern a few months ago. On Sunday, I decided to make it, and I finished it Wednesday night. 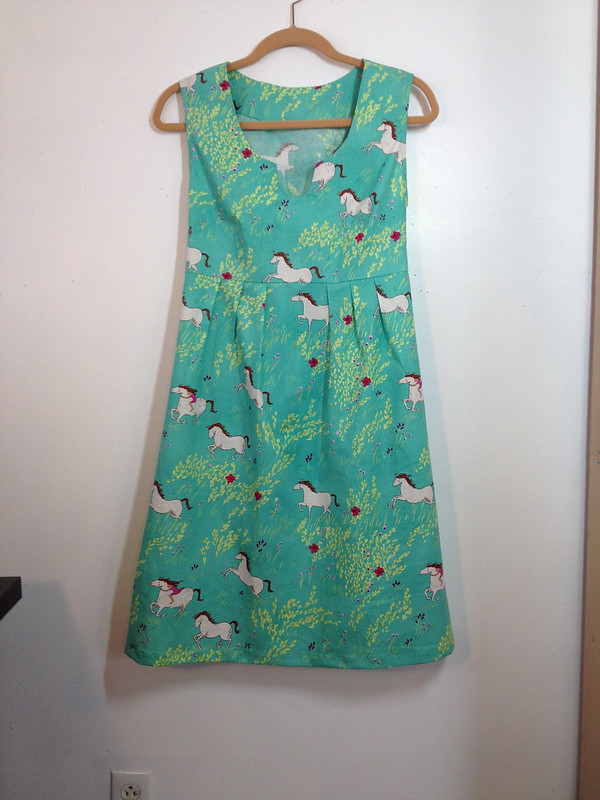 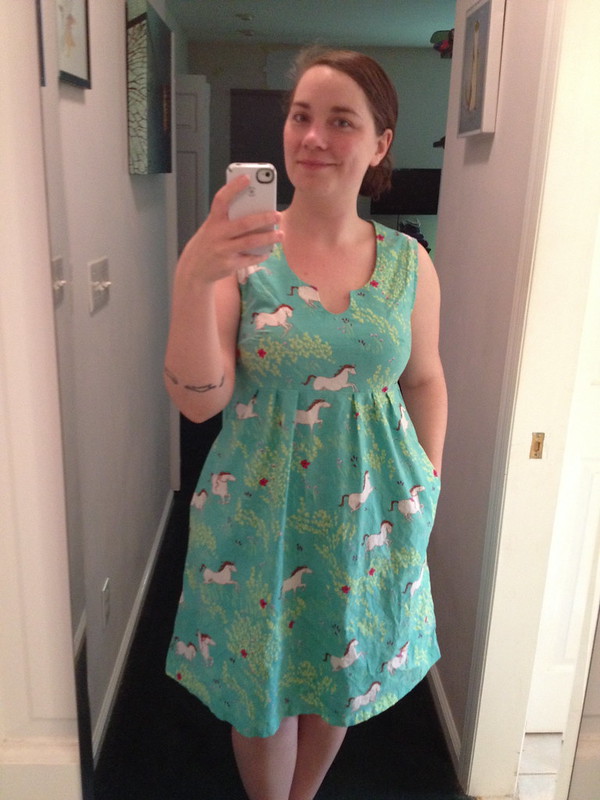 In the meantime, I had taken the CD from the Alabama Chanin book to the FedEx Office shop and gotten the new patterns printed large scale. I’m a terrible monster so as soon as my Washi Dress was finished I pulled out a knit from my stash and began an A-line dress from the new book. And finished it on Saturday night. 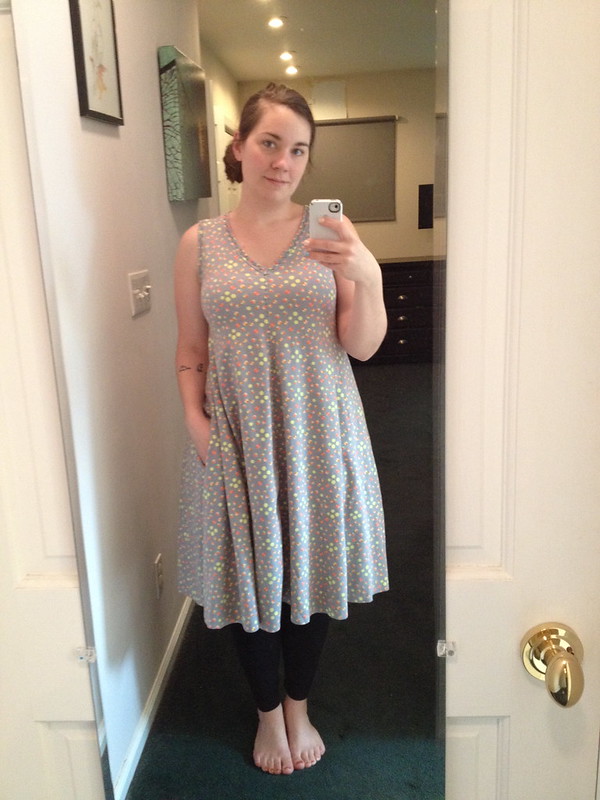 I’ve made a whole bunch of Alabama Chanin garments from the books for myself over the last couple years, and it’s surprising to me how differently they fit. I use different sizes across the patterns.

When I made my first tshirt, I made it in size L. For the other pattern in that book,the fitted dress, I use a size L on top and switch it to XL at the waist, so I thought maybe the tshirt would fit the same at the top and be looser at the hip. NOPE. The L was way too small. I remembered reading one of their blog posts about modifications to the pattern, and ended up inserting two godets on the side seams to make it fit a little better (it’s still too tight for me to wear outside of my house though). Then I switched to size XL, and still added godets to the side seams to make that fit better.

Lately I’ve been really into tunic-length tops, and thought maybe I should use one of the suggested modifications in that blog post the way it was written! So yes. I did it with inside felled seams and short sleeves, and again dropped the center front neckline by five inches. 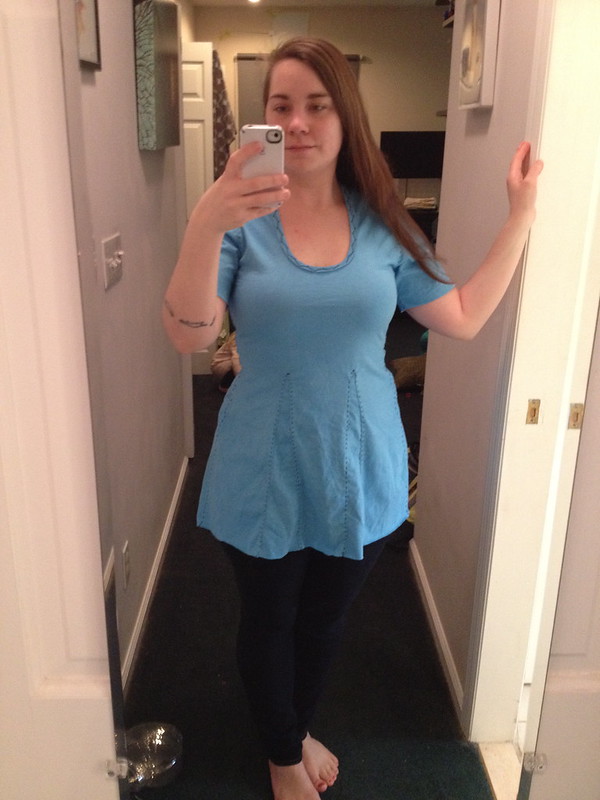 (I didn’t take any other pictures, whoops!)

Fabric is Dharma Trading jersey dyed by me. Considering throwing it in another dye bucket for interest now that it’s finished, but I don’t know. 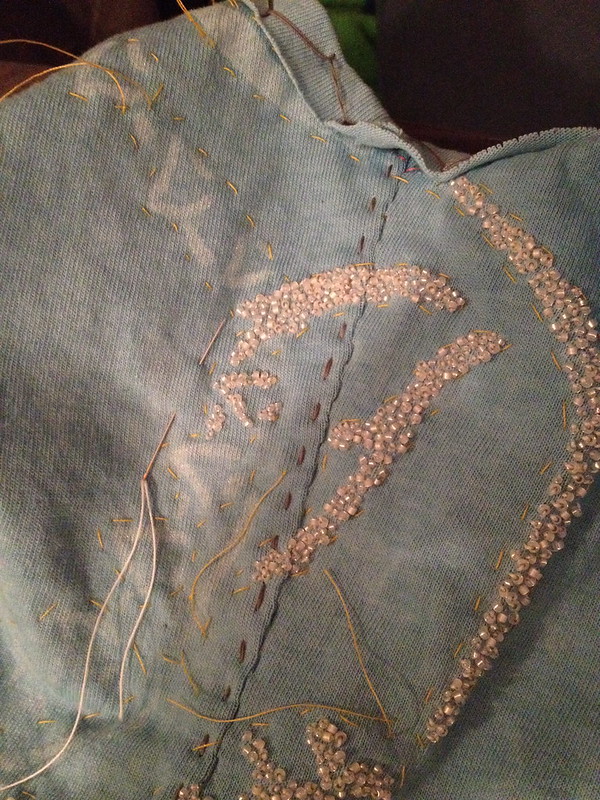 Went back to the right side of the dress to start filling in the hinge. Now I’ve run out of Gilmore Girls and have to pick something else on Netflix. (I don’t really need suggestions, I just need to get better at making decisions.) 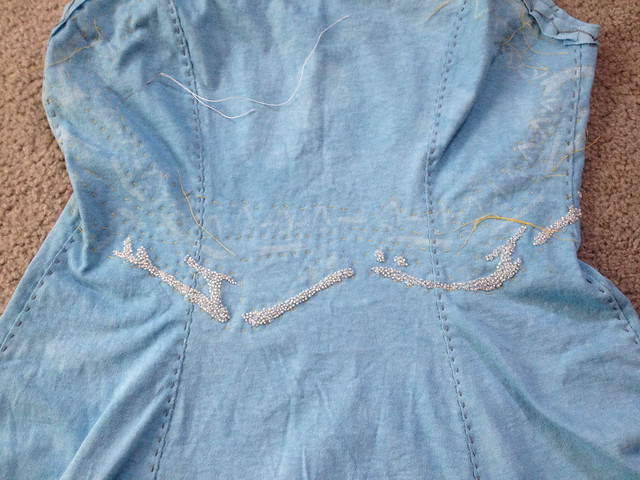 Finished two big sections and two itty-bitty sections in that time. You can see some comparison with what was finished Feb 2-15. 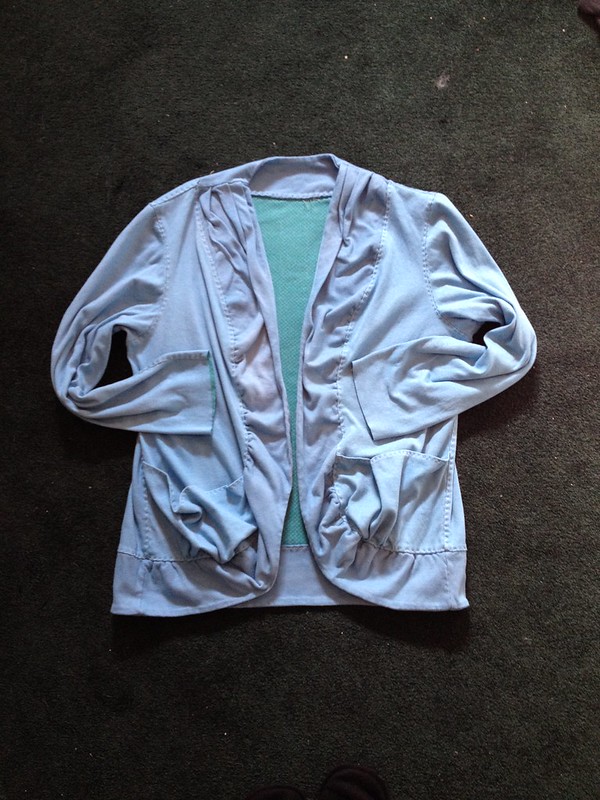 I also dyed an old H&M hoodie that I never wear anymore. It was light heather grey. Now it is purple. 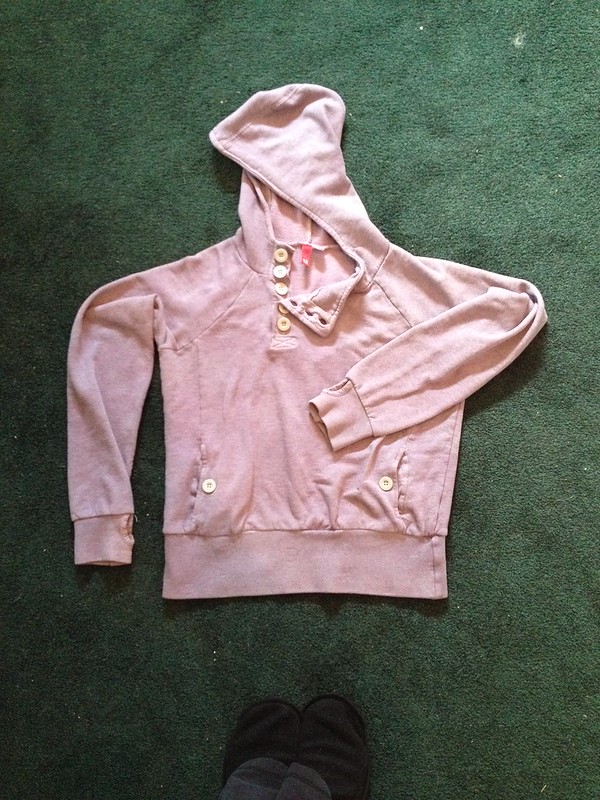 Look at all the cat hair on my bedroom floor.

WELL, it’s kind of finished. I’m going to dye it. 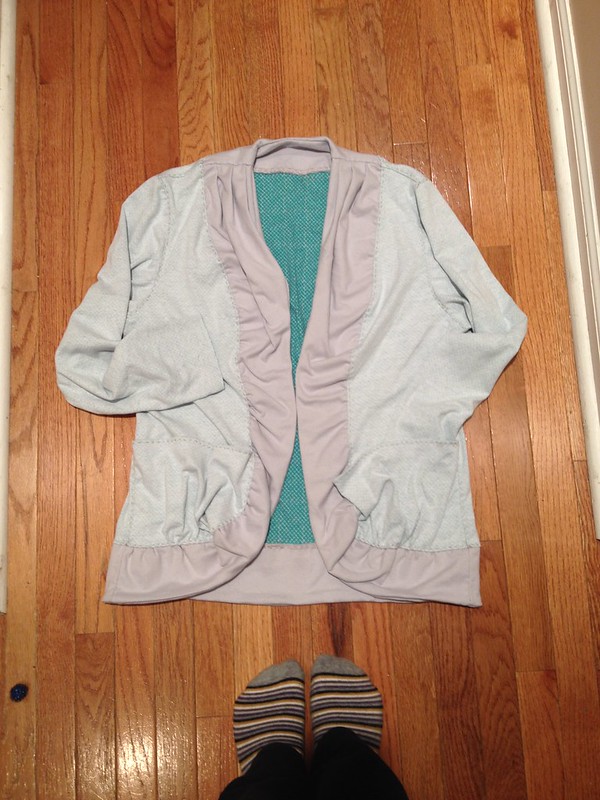 Pattern: BurdaStyle Batiste Jacket
Fabric: interlock knit from the Doodles collection at Jo-Ann, but wrong side out.

After I finished a couple of my Alabama Chanin garments, I was thinking about knit jackets.. I am always on the lookout for a moto-style jacket made out of knits. Not sure why. I just love them. And have never bought one. Burda has a great-looking moto jacket pattern (Larissa), but I felt like I didn’t have nearly enough experience with sewing garments in general, much less trying to translate a pattern for wovens for use with knits and hand sewing! The batiste pattern looked so much simpler, so I thought it would be a better place to start.

Once I printed and cut the pattern, I planned on making one the right way so I could get the feel first before trying to change it. And then I did not do that at all and just cut it out of the knit. The interlock prints are from a children’s line at Jo-Ann, so I decided to sew it wrong side out and dye it later. Whatever.

I don’t remember when exactly I started this, but I estimate it was about a year and a half ago. I cut the parts and started putting them together, then realized it was probably unwearable or too odd in such fabric, so I left it in its own project box and moved on.

As I was sewing, the directions were a little vague in one part, and I’m pretty sure I sewed the band on backwards. Somehow. I sewed it on one way and thought “this looks totally wrong!” so I took it off and sewed it the other way. It still looked wrong. But by then I decided I didn’t care enough about its wrongness to try again. May it stay that way forever.

I am a person who went to art school and had to do 2-D design and owns at least two circle inking templates and various drawing and stenciling tools. But all those circles I’ve been appliqueing onto that little bolero vest thing, you know how I’ve been cutting them? 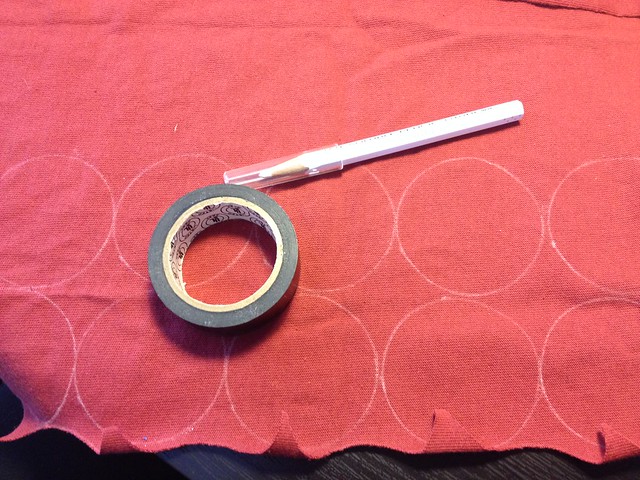 This year I’m making a quasi-effort at planning my wardrobe sewing in advance. I looked at what I already have in my closet and drawers, and I think I need more color. I love bright colors! Why am I not using bright colors?! 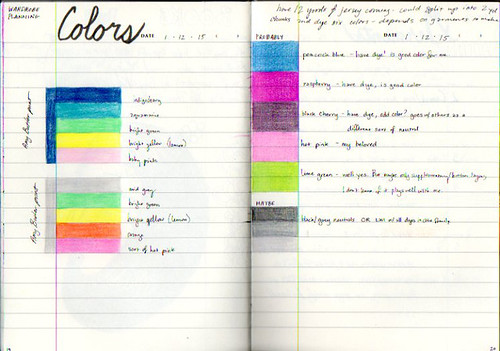 I have all three of the Alabama Chanin books at hand, which have a bunch of patterns that can be modified into even more garments, PLUS I signed up for Natalie’s Craftsy class because daaannng yes I want a coat and instructions on how to modify patterns for wovens. She has a new book coming out soon, too, and I will certainly get it.

For fabrics, I have three cuts of commercial knit yardage in my stash. I ordered twelve yards of jersey to dye for myself. Plus uncountable scraps and old clothes to cut up. 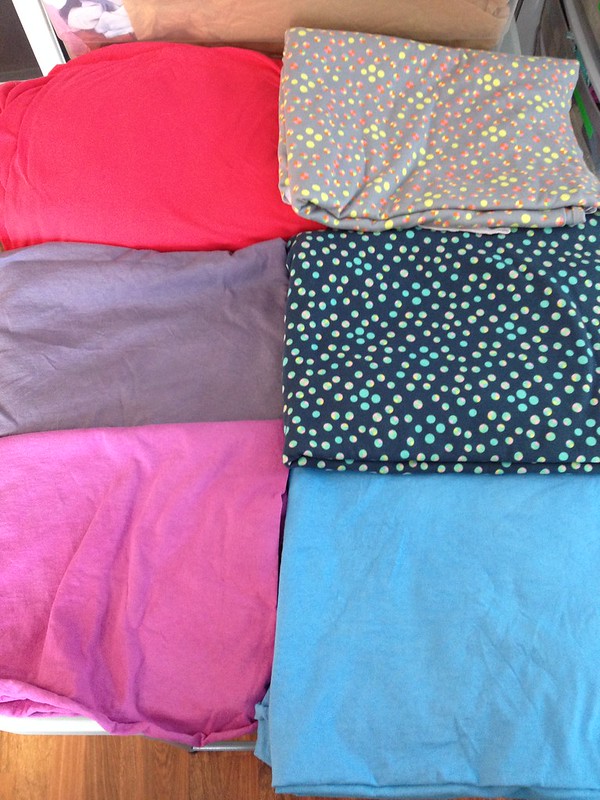 So far I’ve barely considered the patterns I have for wovens, but I do have plans on that front as well.

This is sort of working? I’m not allowed to start cutting any new projects until I finish one of my UFOS, I’m only allowed to consider them on paper, so I’ve worked out quite a bit.

This isn’t really doing it backwards, but I did decide that this green camisole dress I finished in December might benefit from some added interest. I pinned it to a hanger, tied up the bottom, and dipped it in a bath of red-violet fiber reactive dye. 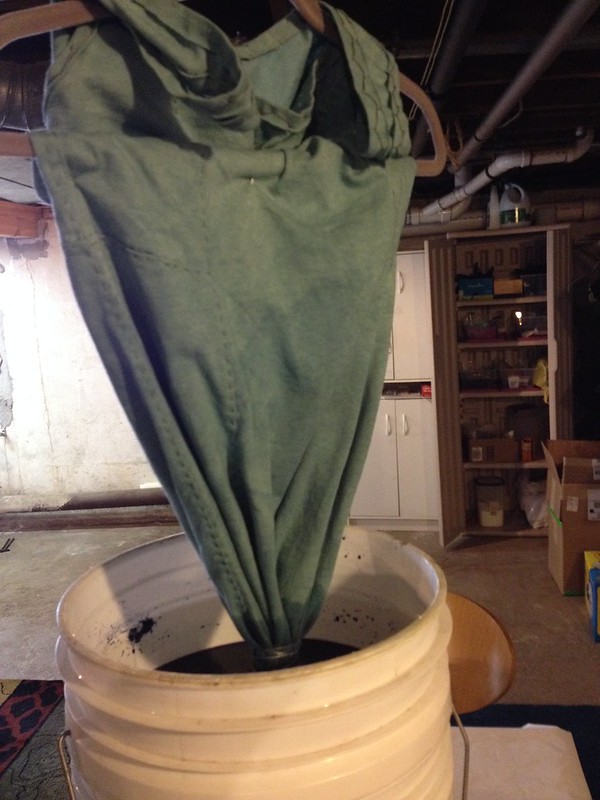 I put the bucket on the table and hung the hanger on a pipe. Thanks, unfinished basement. 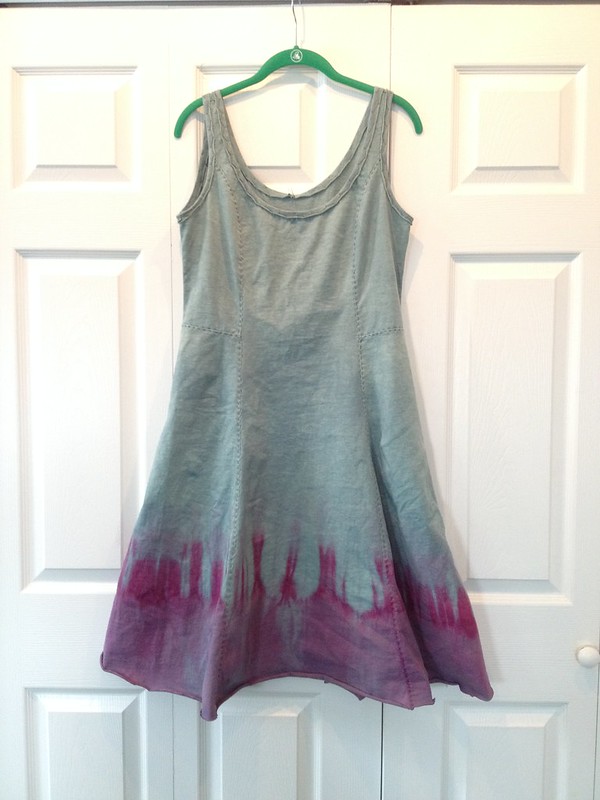 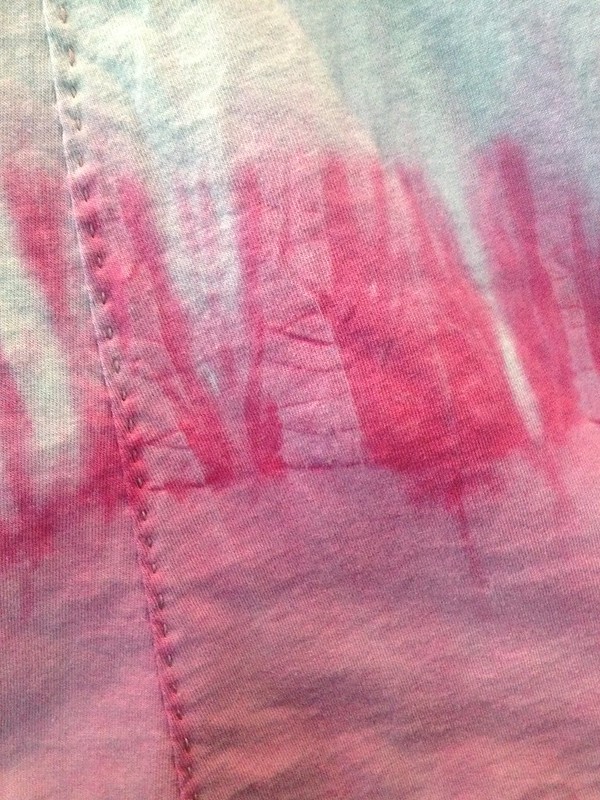