In my last post about dyed scarves, I mentioned that I usually have a pile of “needs more work” scarves somewhere.. Most of my scarves get dyed twice so I can make those interesting resisted patterns on them, but I don’t always know what the second round is going to be, so that’s why there’s a pile.

I took a pink inkblot-looking scarf out of the pile, and decided instead of overdyeing it, I would draw on it with black acrylic ink. It is.. weird, yes. But Kind of cute. 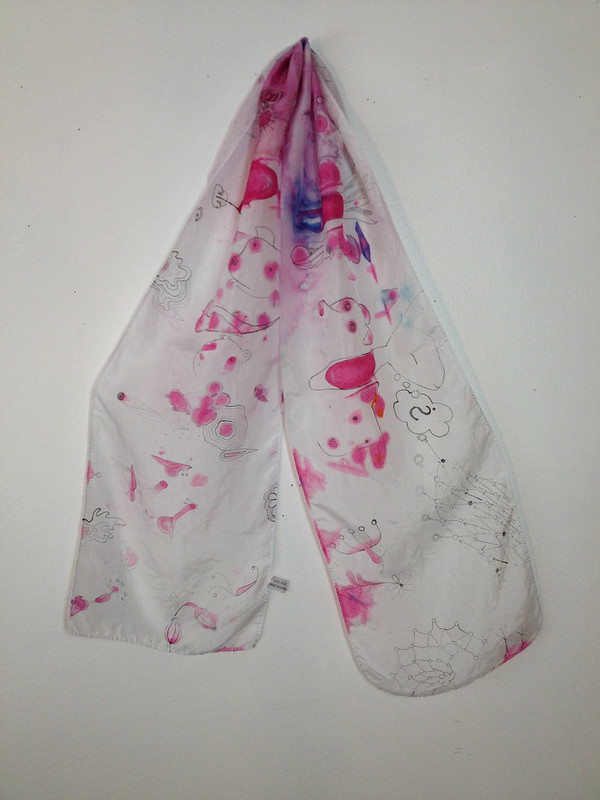 There are dogs, bears, squid, flowers, snails, rabbits, shapes, and who even knows. 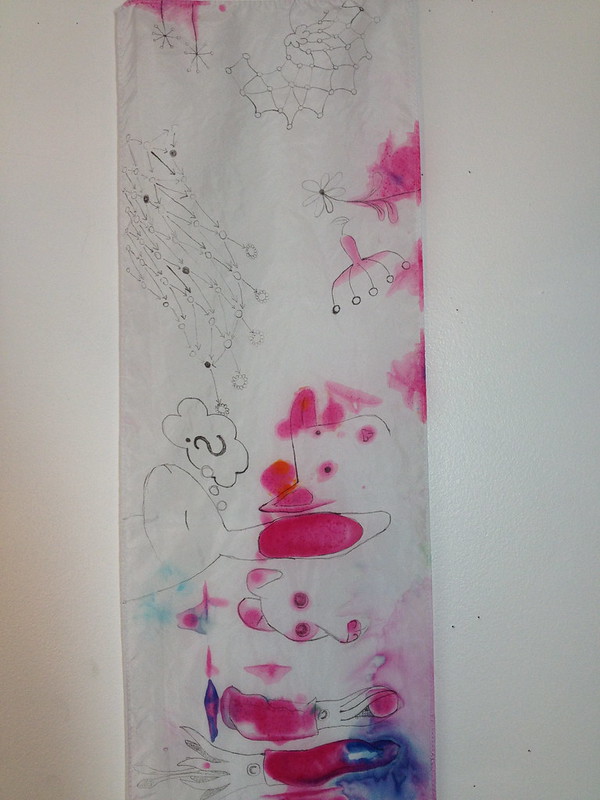 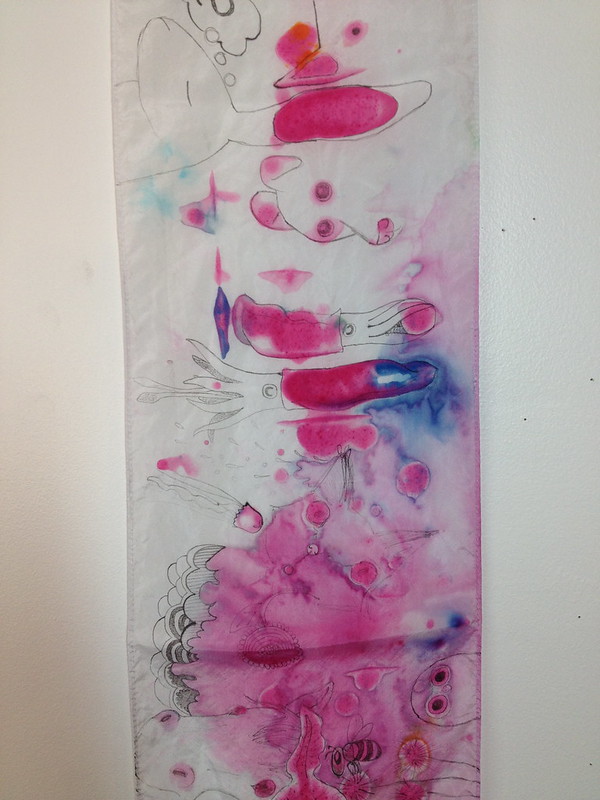 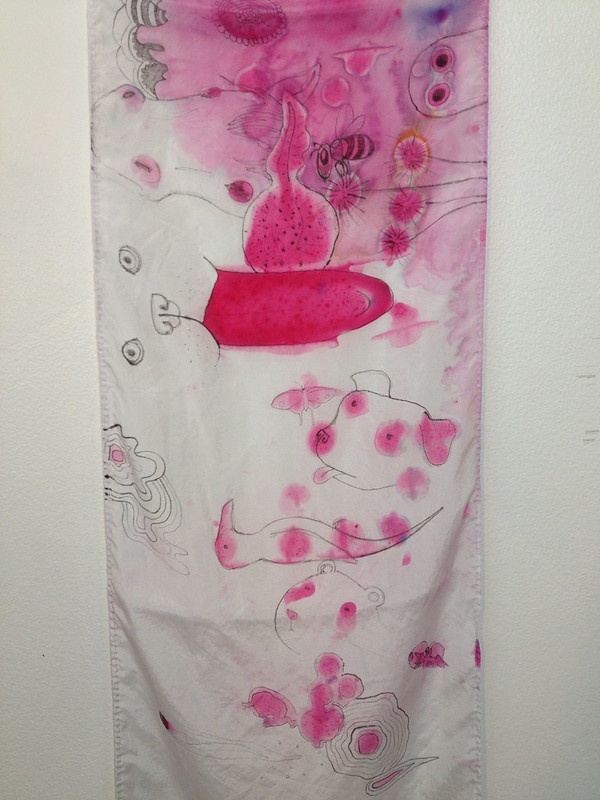 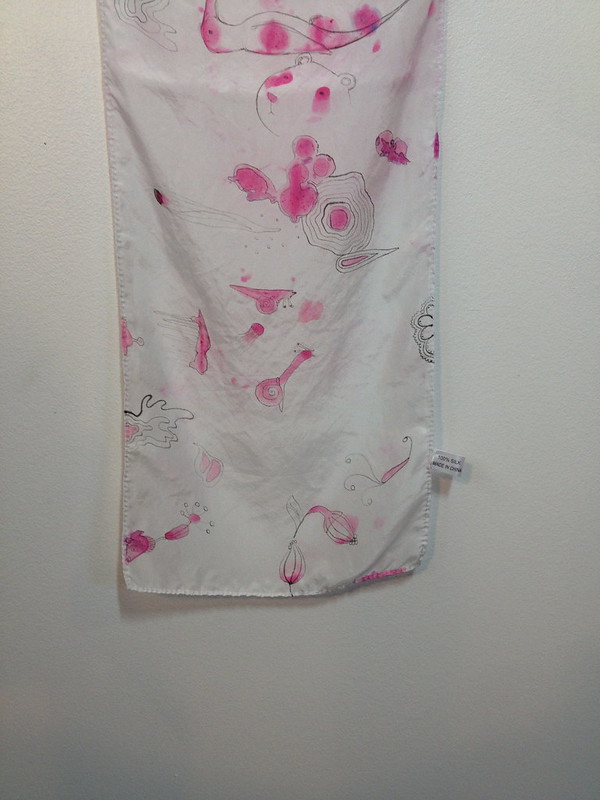 When I dye and paint my scarves, I like to keep one or two around for testing out techniques and materials, or for somewhere to use up any excess thickened dye. I guess they’re kind of like scratch paper? Rags? Here are two examples I just retired: 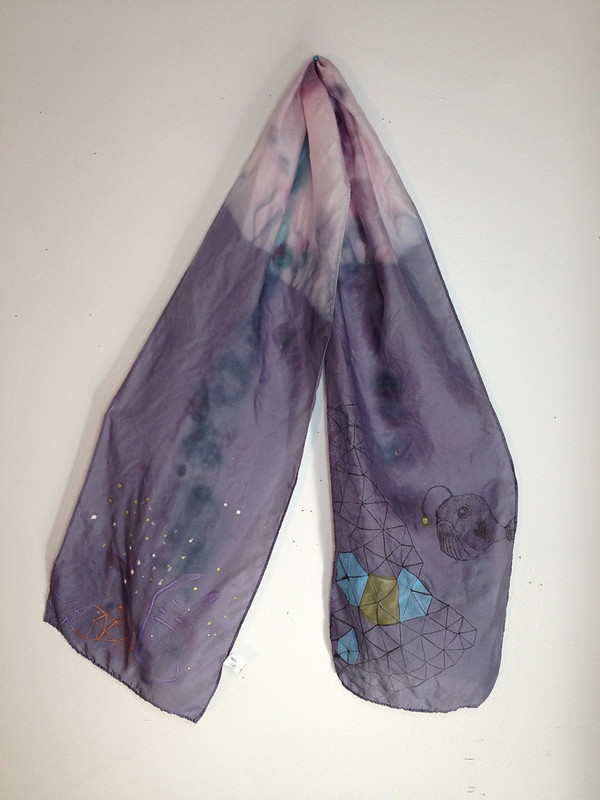 I started this one about a year ago when I bought my first bottles of acrylic ink. There’s ink and dye on this. I tested shading with a small brush, how the colors would bleed if they were wet, and how the colors mixed with white, among other things. I also dip-dyed it and did some other stuff. 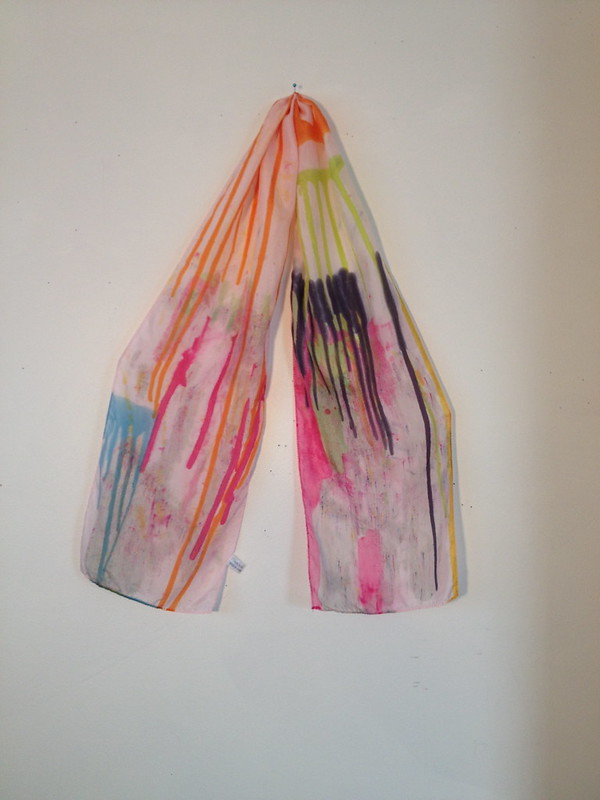 This one features a few months’ worth of thickened dyes. It was doubled up on a hanger, and I globbed the thickened dyes on it and let them drip down on their own. Usually after I retire one of these, I resist it and overdye it in some way, but I think this one looks pretty good as it is. 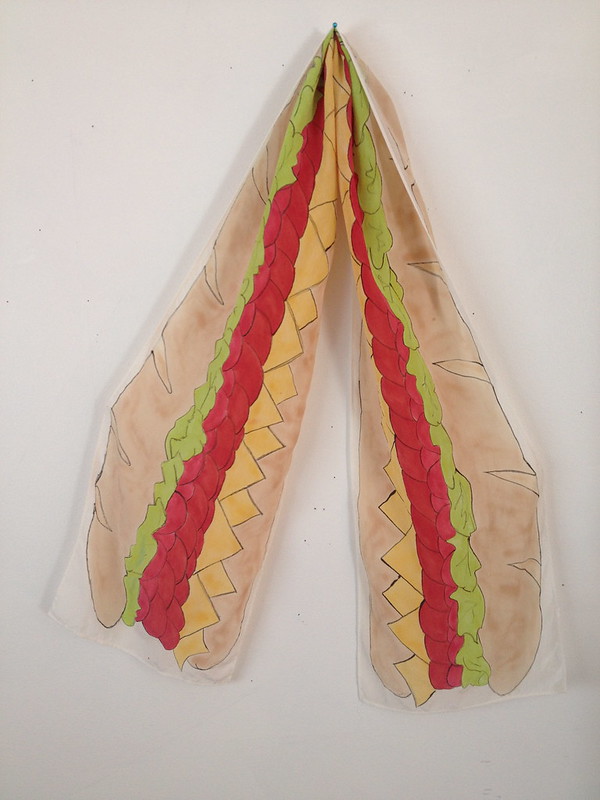 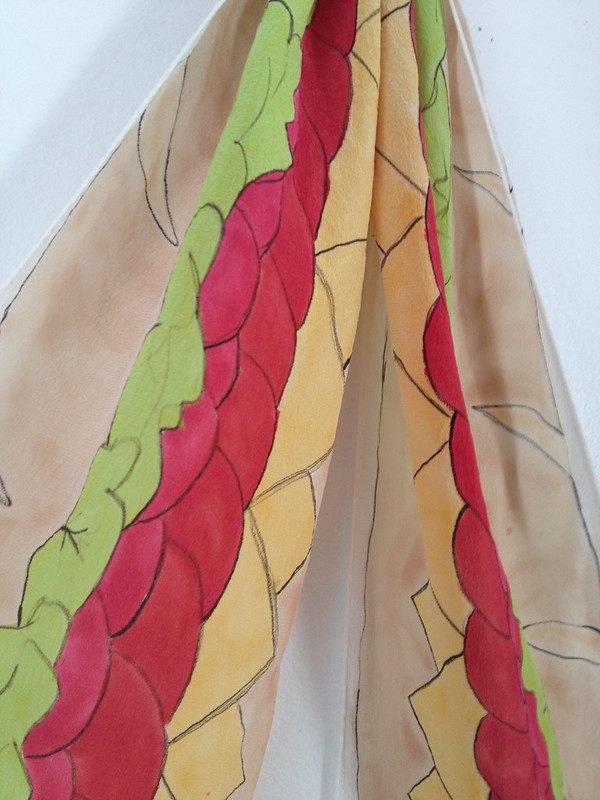 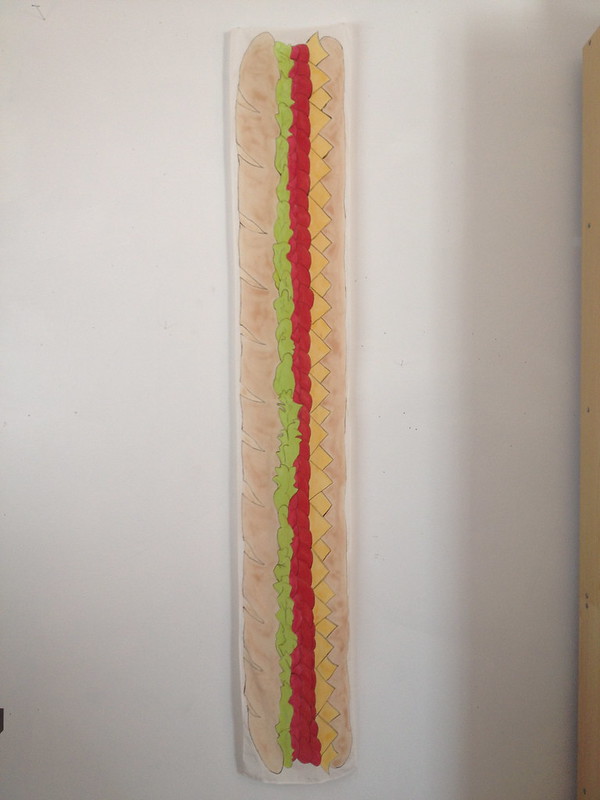 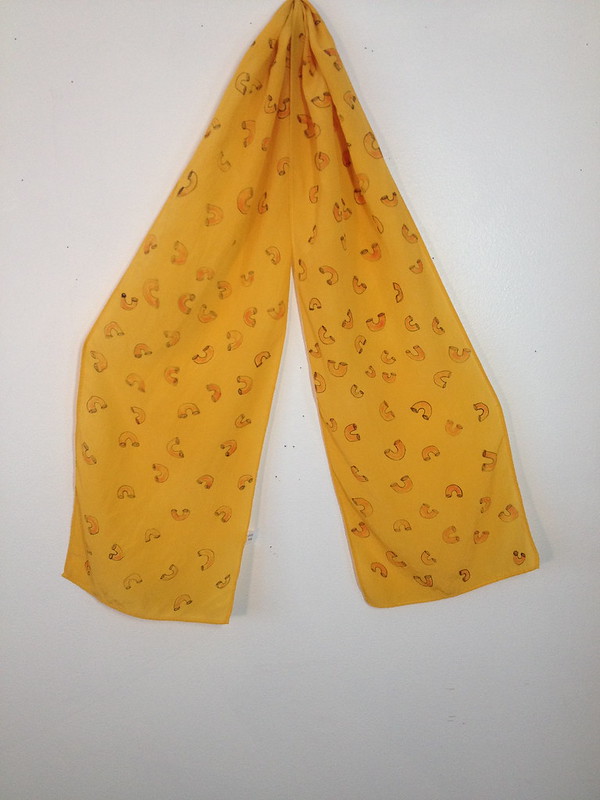 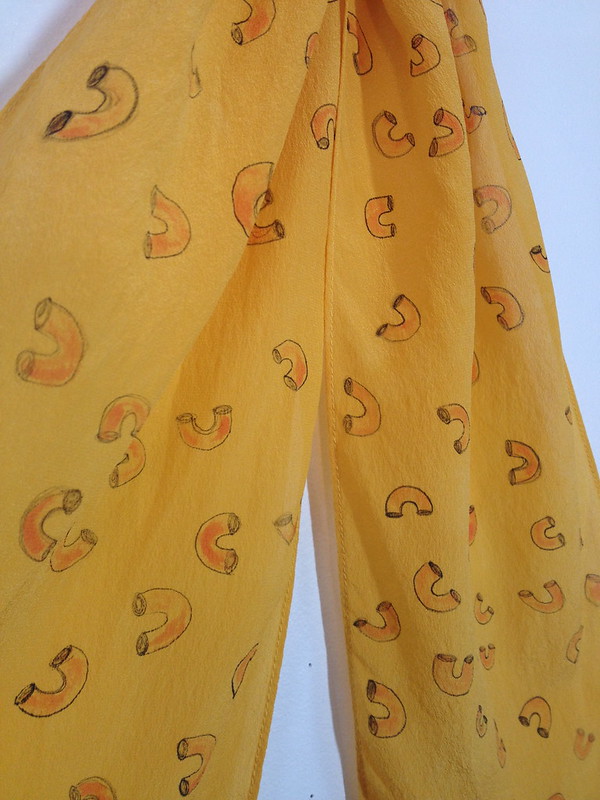 I wanted to do some more painted scarves before my shows in March, but my sketchbook has been light on good animal-themed things lately, so I was thinking about food, and what I did with the pigeon scarf from last year, and then oh right how about a whole pizza scarf? 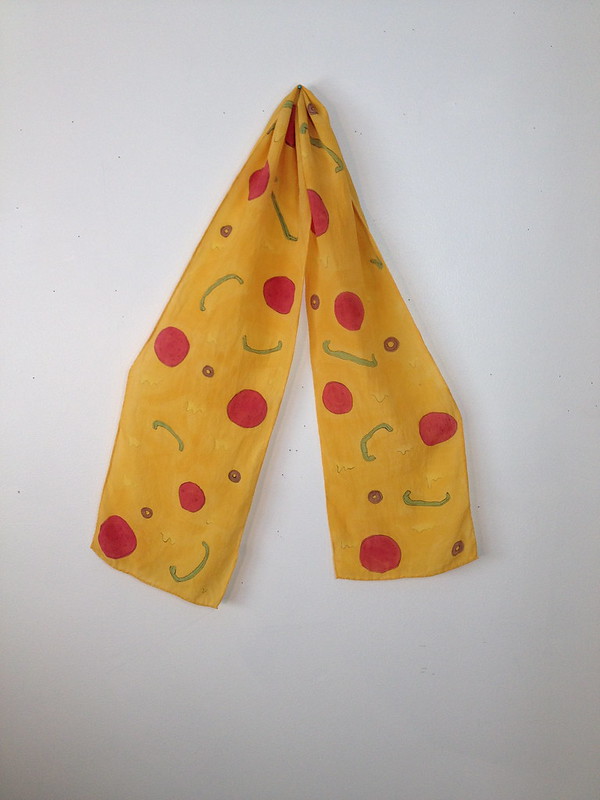 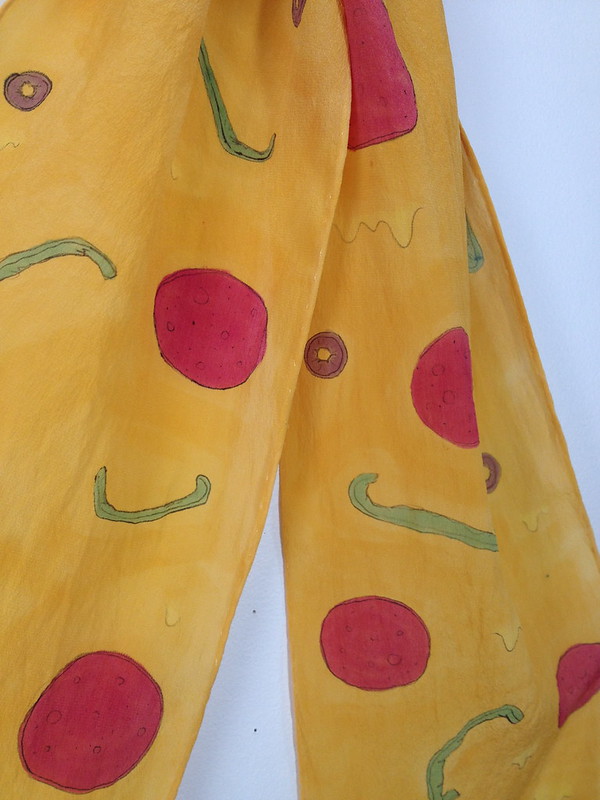 Outlines are acrylic ink and the color is fiber reactive dye.

This is the last scarf I finished painting in 2014, in the first week of November. Just took pictures this week. It was a fast one. The black outlines and white highlights are Tsukineko acrylic ink and all the other colors were thickened fiber reactive dyes. A sketchy, smeary thing, based on photos from a trip to the Monterey Bay Aquarium in 2009. 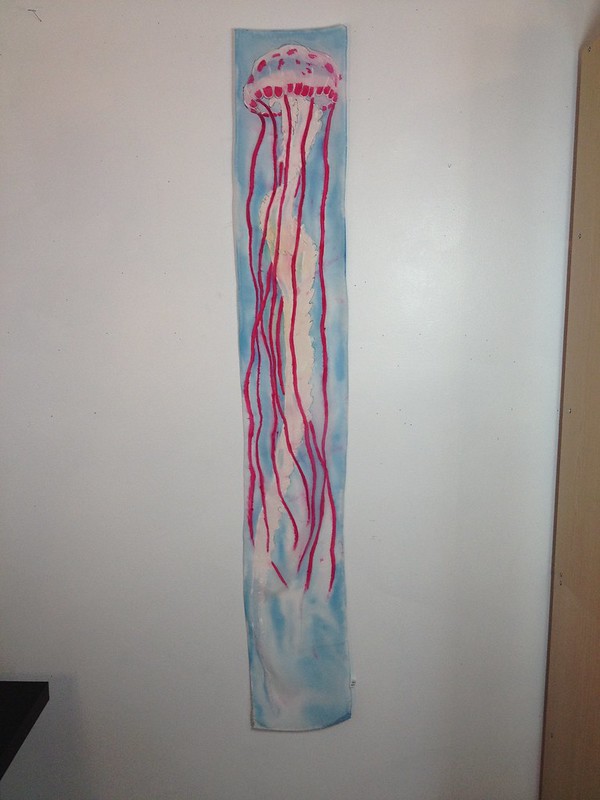 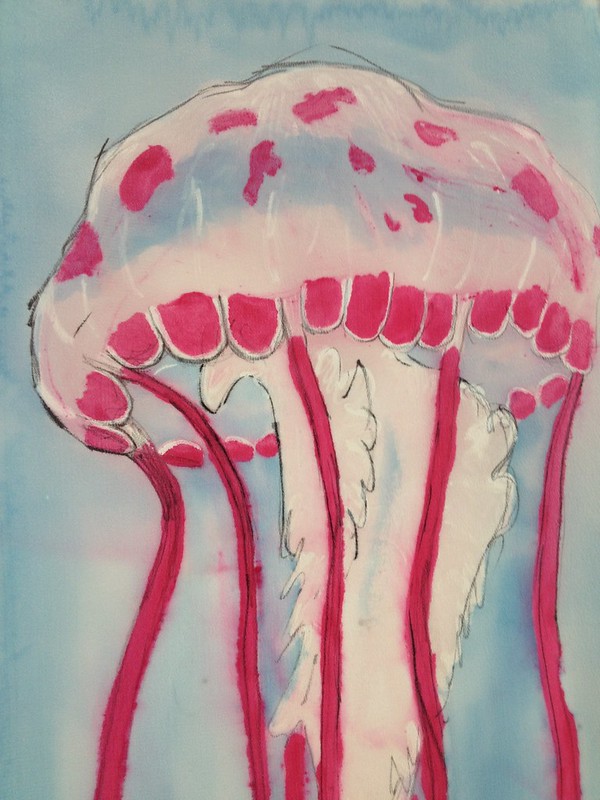 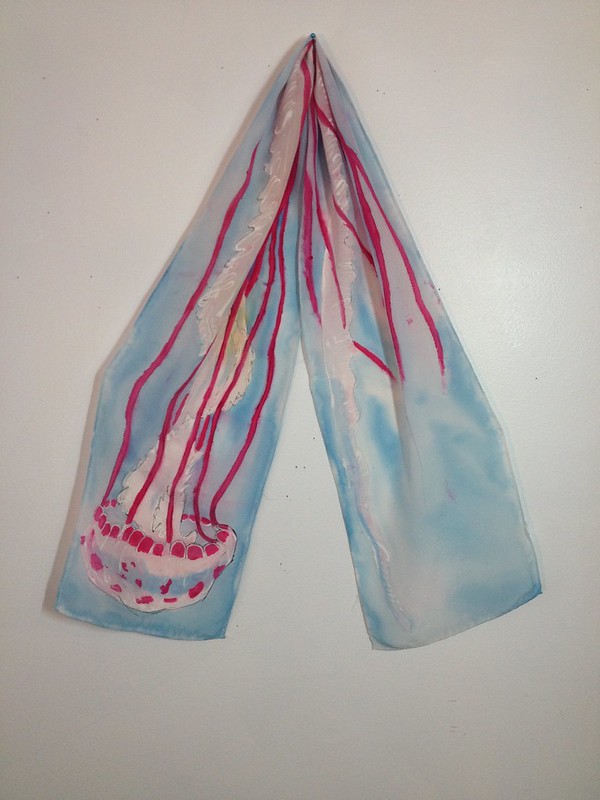 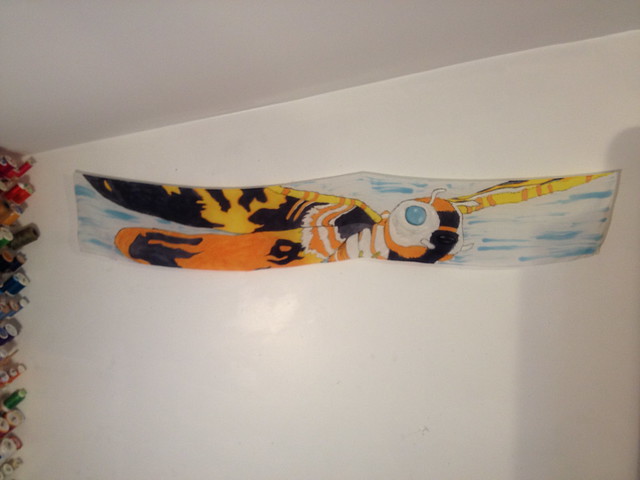 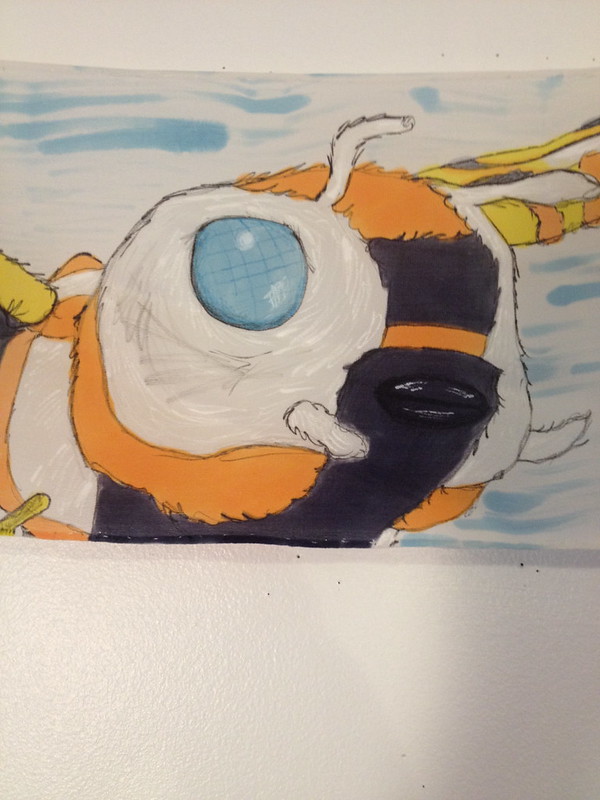 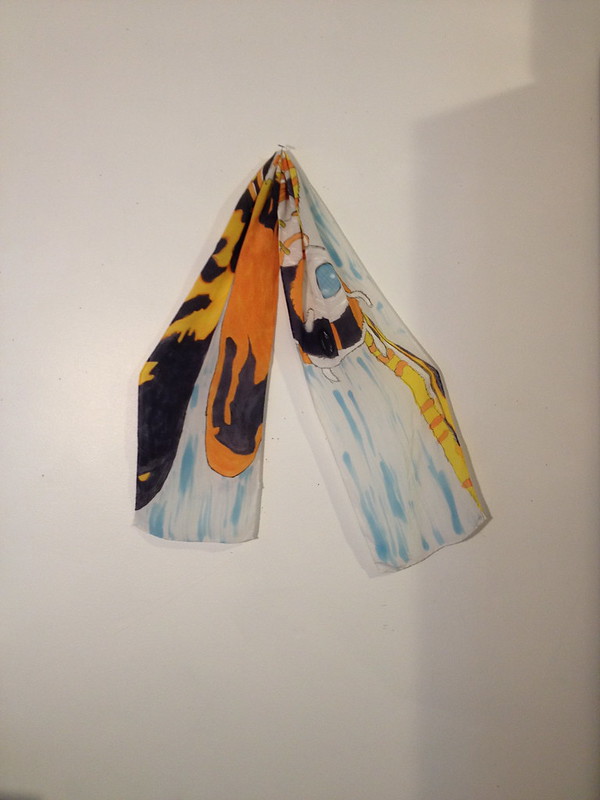 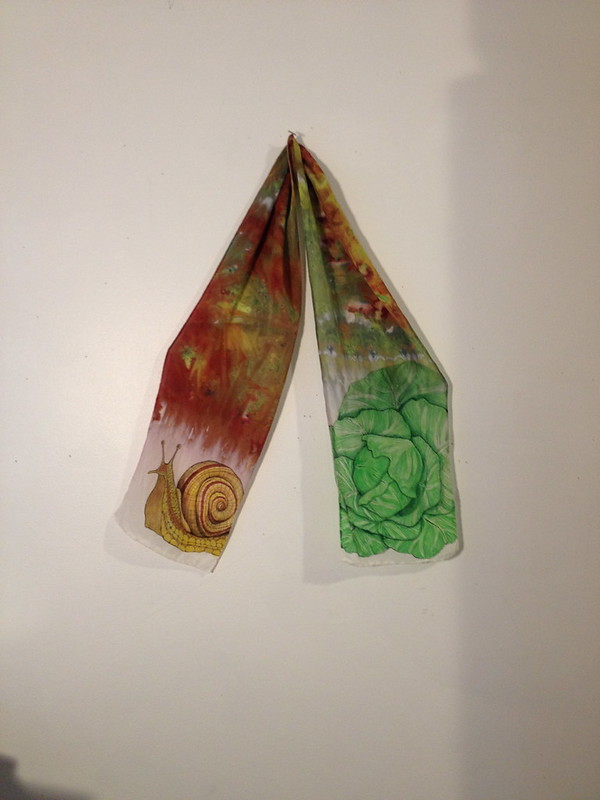 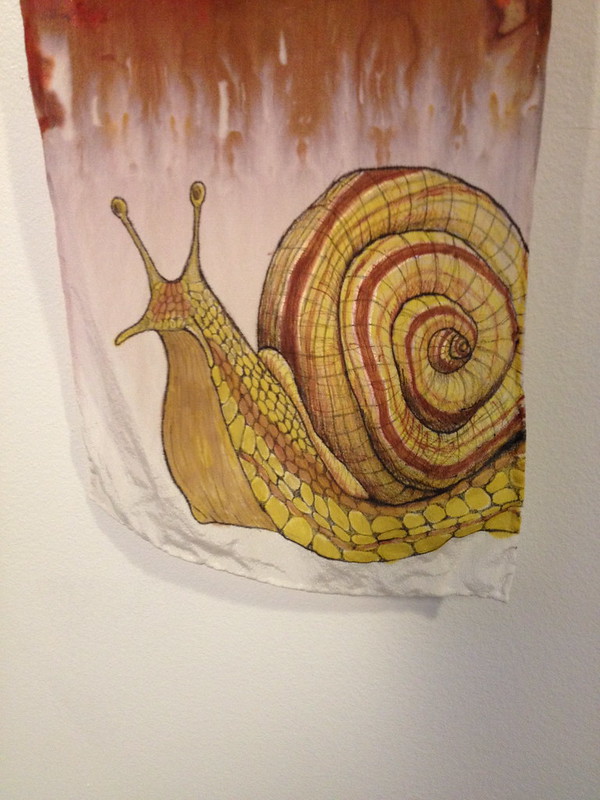 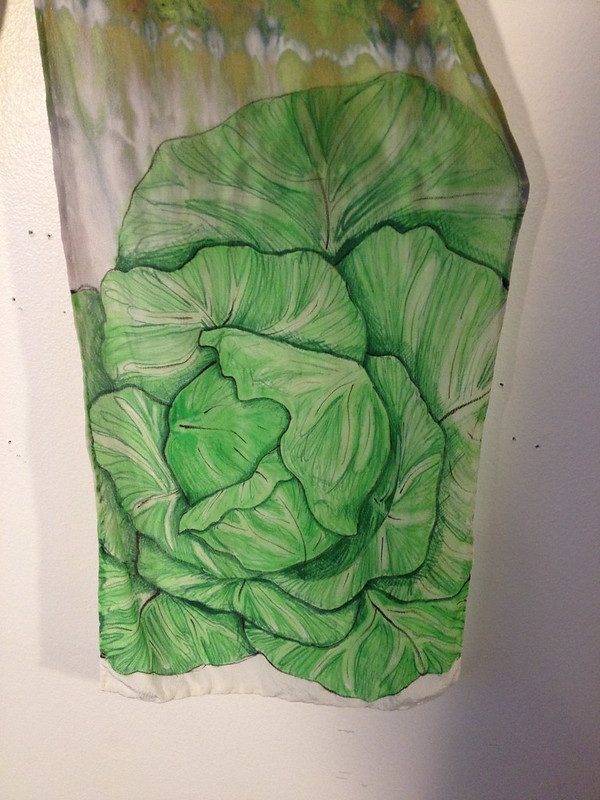 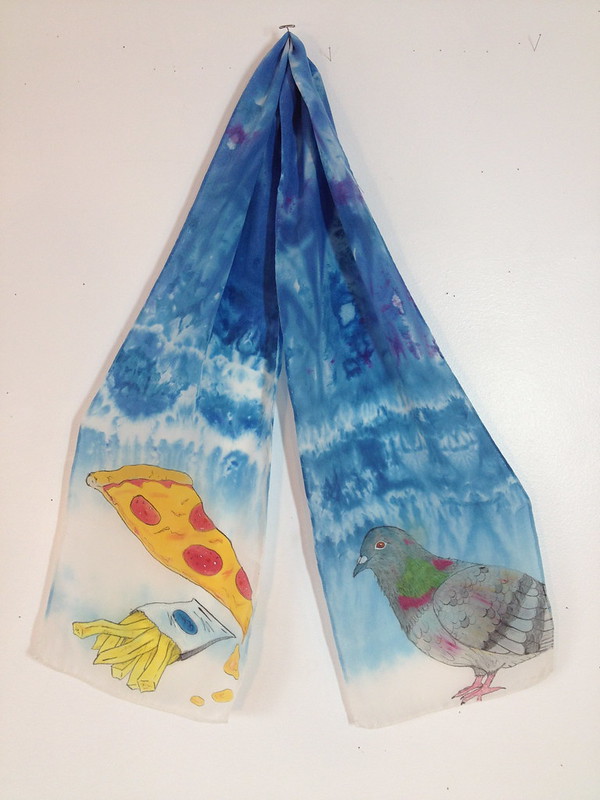 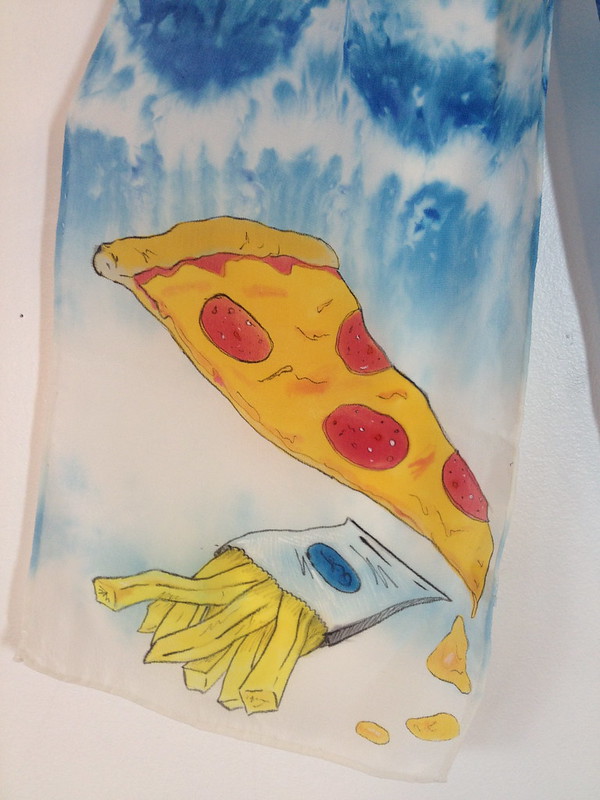 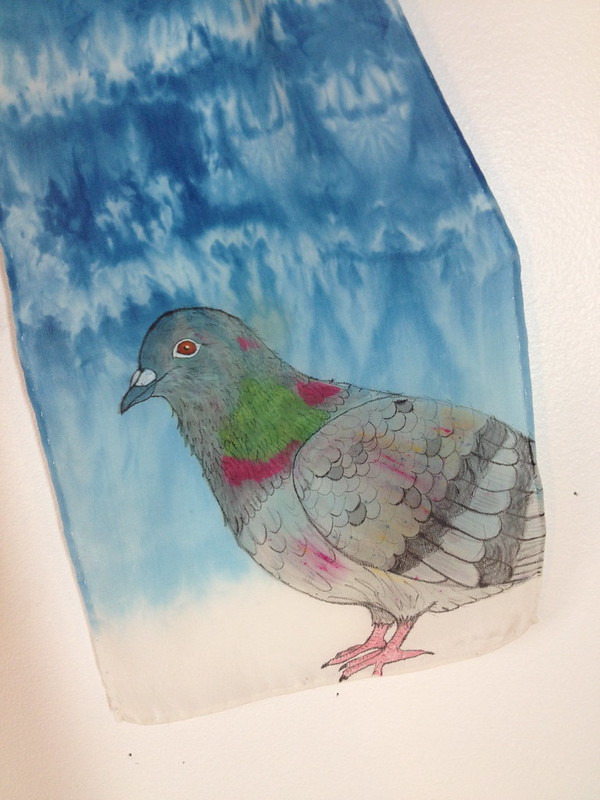 I took the summer off from doing shows, and spent most of my time making clothes. But I did have two people send in requests for illustrated scarves. I delayed posting the first, finished in June, because it had to travel allllll the way to New Zealand to be given as a gift, and I didn’t want to spoil it for the recipient. It is easily the cutest thing I’ve made this year, and I like how it turned out. Hedgehogs at twilight: 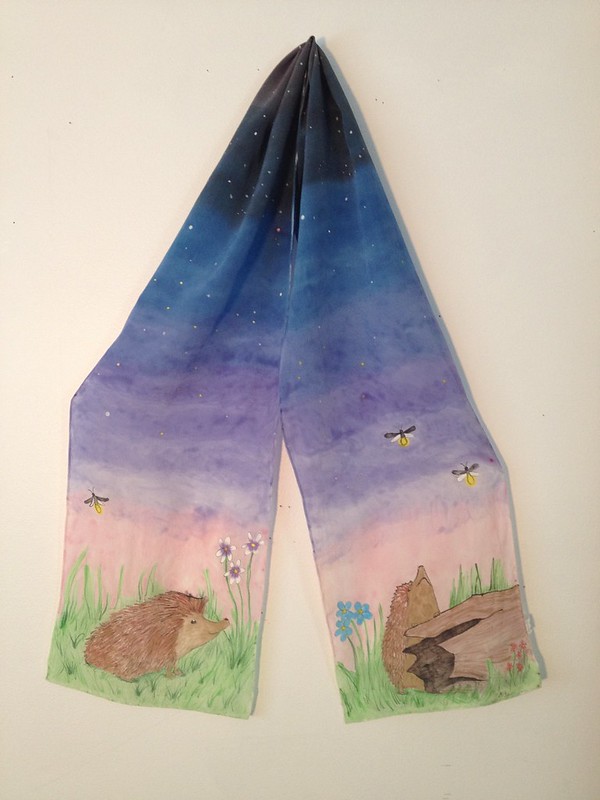 The second scarf was done in July. It’s a loaf of bread and a bird named Archimedes from the video game Team Fortress 2. 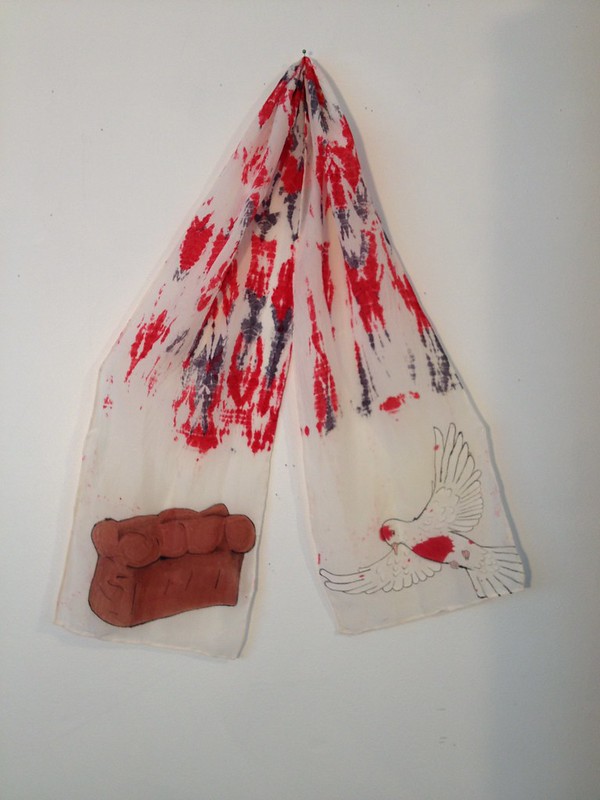 The middle part was tie-dyed with thickened acid dyes, and the figures were done in acrylic ink.

I love doing these, and considering I’ve just signed up for my first fall show, I need to get cracking on some more.